Pipe Up! A Campaign to Restore the Frobenius at Fifty

Give to the Frobenius Organ Fund

Missed the concert live? Watch it on our YouTube Channel below:

A letter from Peter Sykes, Director of Music:

Even before you hear it, the great Frobenius organ at First Church in Cambridge is a wonder, with its 2,949 pipes, ranging from one-eighth inch to 16 feet, arrayed in four divisions, in a case that fills one-third of the front of the sanctuary. 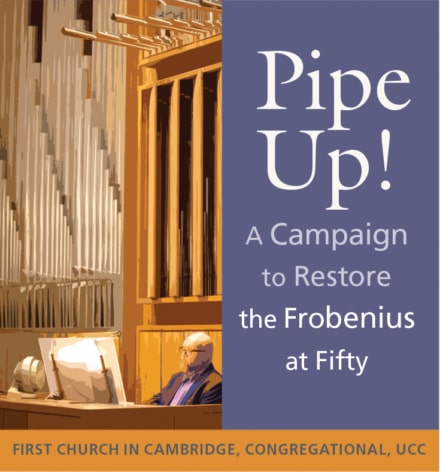 This organ, which has three manuals and forty stops, was made in Copenhagen in 1972 by the renowned Danish organ builders Frobenius and Sons Orgelbyggeri. This year marks the fiftieth anniversary of its installation and dedication at First Church.

My first encounter with this magnificent instrument was in 1976, as a budding organ student at the New England Conservatory. My teacher, Robert Schuneman, was then First Church’s Director of Music. So my lessons and hours of practice were on this Frobenius. Nine years later (thirty-seven years ago) I became Director of Music at First Church and have been enjoying the organ on a daily basis ever since.

Year in and year out, the First Church Frobenius:

At fifty, our hard-working organ is no longer sounding its best. It has not been cleaned since 1995, and the buildup of dust inside the case is fierce. Every pipe has to be removed and cleaned and upon replacement given a careful tuning. Some electrical components need to be updated. The keyboard coverings show the wear of many thousands of hours of playing and need to be refurbished. The projected cost is $160,000, a once-in-a-generation expense.

We have named our effort to raise this amount Pipe Up! A Campaign to Restore the Frobenius at Fifty. We ask all who care about organ music and its future, from within First Church and from the larger world, to consider a contribution.

Surely this is a time that we sorely need the inspiration that this world-class instrument can provide. Your gift will ensure its continued service and inspiration to all who hear and play it. So, please PIPE UP!

Give to the Frobenius Organ Fund