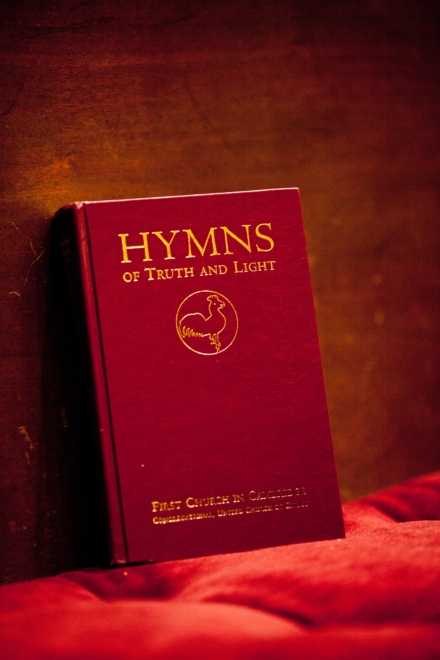 Since 2003 First Church has sung from Hymns of Truth and Light, a 1998 publication of the First Congregational Church of Houston, Texas. This hymnal incorporates inclusive language into a wide spectrum of musical styles in over 500 hymns. Of special interest is the first section of the book, containing hymns indigenous to our First Church – the “Cambridge” section in which the hymns are numbered C-1 through C-28. These hymns belong to us in a special way, either coming from the Bay Psalm Book of 1640 (in which publication First Church took a part) recast by member Denise Karuth, or written in whole or in part by First Church members, clergy or staff. New hymns are continually being written for our congregation, and we sing our praises in myriad ways.

The First Church Choir sings special choral works for the major church holidays—Christmas, Easter, and Pentecost. Often, these are accompanied by instrumentalists or orchestral players drawn from our area’s rich resources of students and professional musicians. The rehearsal schedule for these works can offer an opportunity for participation for singers who may want to join the Choir part-time. Sometimes, as these works are being rehearsed, the Sunday music is learned and rehearsed on Sunday mornings only in a “pick-up” choir fashion, giving a different opportunity for occasional participation. Also, the First Church Choir sings all through the summer as a “pick-up” choir, and singers are invited to join for any Sunday during that period.

Check out our playlist of our latest special music projects below:

DIVERSITY IN OUR MUSIC

Sacred music is as historic as the Bible and as diverse as all humanity. Expressions of lament and praise, of gratitude and awe, have been made in all times and places through music. Our repertoire must therefore honor all the musical ways in which humanity has sought God. We sing hymns from all over the world; our choral repertoire goes from four centuries of history to our present day, and we hear music brought by myriad tradition-bearers from many other places near and far. One historic moment was when Duke Ellington brought his “Sacred Service” to First Church in 1967; that service was commemorated in 2017 with guest singers and musicians collaborating with the First Church Choir.

To learn more about our current work in diversifying our music repertoire, explore our justice pages.

This organ was the first large Danish organ and the first (and still largest) by the Frobenius firm imported to the United States; since that time three other Frobenius organs have been installed in California, Florida and upstate New York. Since its installation it has been featured in recitals by such artists as Finn Viderø, Mireille Lagacé and E. Power Biggs; in two national conventions of the American Guild of Organists, played by Roberta Gary in 1976 and Peter Sykes in 1990; and in tours by the Gesellschaft der Orgelfreunde of Germany and the American Institute of Organbuilders.

Learn about and donate to the Frobenius at Fifty fundraising campaign

The organ in Lindsay Chapel was built for the Clark family of Weston in 1973 by the Noack Organ Company of Georgetown. It was moved to the Chapel in June of 2010 initially for display purposes and was subsequently purchased by First Church. It has three stops, three ranks of pipes on one manual, with a permanently coupled 30-note flat pedalboard, and is tuned in the Valotti temperament at A-440.